A Look Back on ELA Conf

Since the spring I have been working with an amazing group of women to bring ELA Conf, a conference all about empowering women to be leaders in tech, to life. 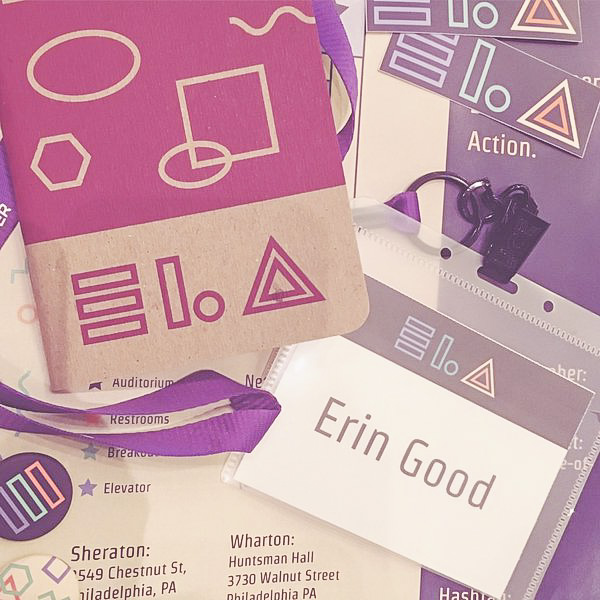 After working on this most of the year this event finally took place in Philadelphia, PA on November 20th and 21st and was absolutely incredible in so many ways.

I wanted to share some more insight into how things came to be, what I saw as some of our greatest strengths, and how I personally feel about all of this now that it’s over. 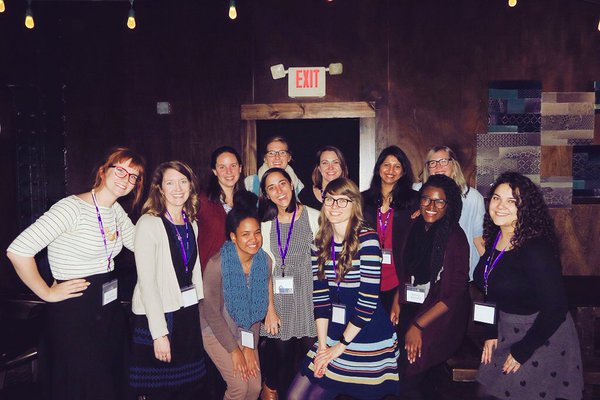 I had a hard time choosing a couple favorite tweets, so I will just leave this link to a Storify recap I put together.

I co-founded and co-organized this event with women whom I respect tremendously: LeeAnn Kinney, Katy DeCorah, and Dominique Clarke.

LeeAnn and I met through GDI Philly. She is incredibly passionate and I have learned so much from her. We joke that we are consistently the two most likely to butt heads (and did we!), but this constantly challenged me to approach things from a different point of view and has made me respect and appreciate her a great deal.

I know Katy through CodePen. When I got started with my career I found her work to be utterly inspiring and learned a so much from breaking her beautiful work.

When she saw what I was up to with this conference on Twitter she reached out regarding how she could help out. Katy was a complete joy to work with and we were all crushed when she said she couldn’t move to Philly :( 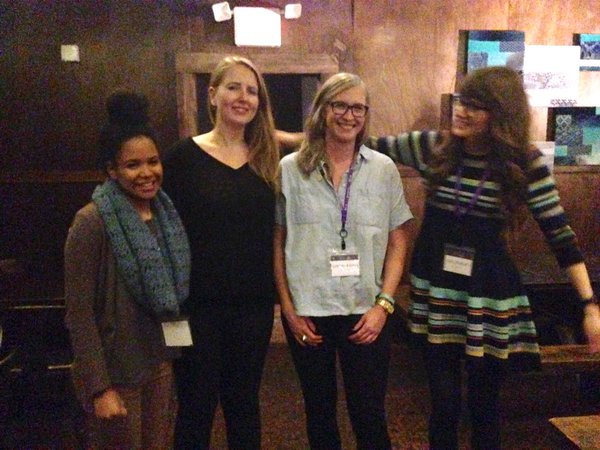 This is us at the networking event that followed. I accidently touched Katy’s neck with my freezing hands, but as she said, these are the things that happen when internet friends meet in real life.

Our greatest strength was in our speaker lineup. 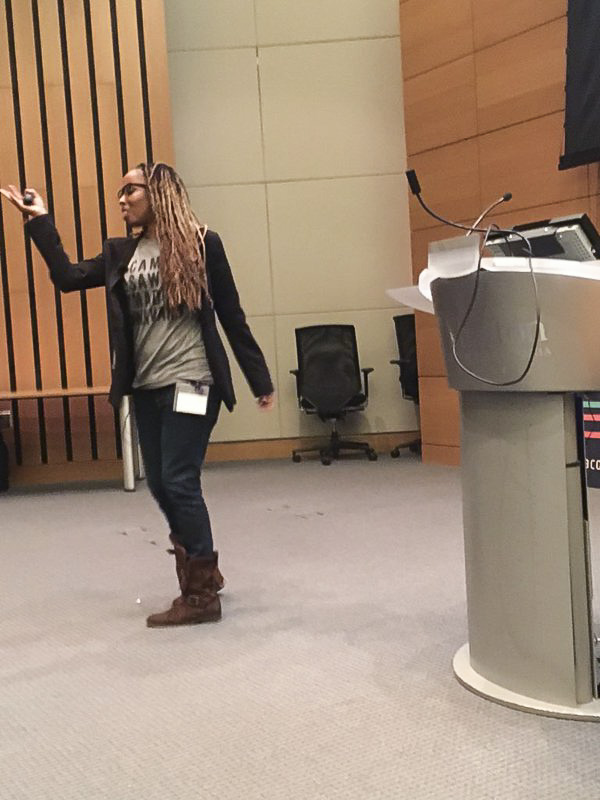 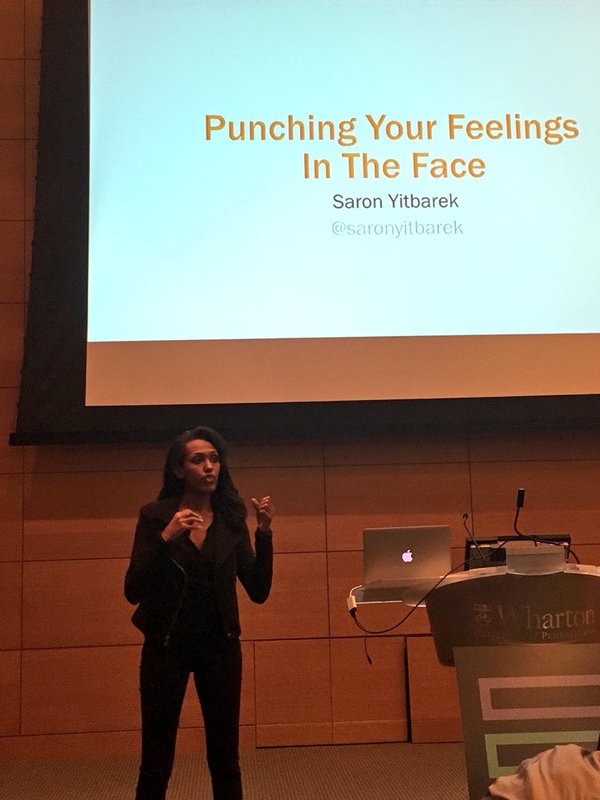 I could write entire posts on how inspiring they all were and how much they contributed to making this event what it was. Also important to note here is that all profits were donated to Girl Develop It, so we can’t thank our speakers enough for the part they played in this. 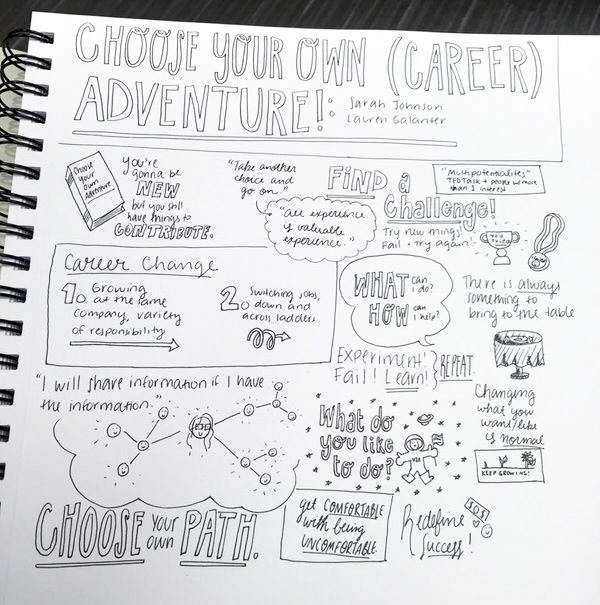 We published a general call for proposal a few months prior and got so lucky with the quality of speakers and abstracts. It became clear that our message was definitely being heard and people supported it. We received abstracts from the Philly area as well as Atlanta, NYC, Virginia, and San Francisco.

Why We Need This

Commercial conferences have a place, but frankly I see a lot of harm as a result of most of them. We often see the same handful of people talking about the same handful of things. This is very dangerous and sending a message that you need 15+ years of experience to be qualified to speak at a conference, which is simply not true.

Did you spend some time learning about Flexbox this year? Well, you are totally qualified to speak about it.

This all circles back to a point that I try to preach regularly which is: students make the best teachers. You remember exactly what the struggle was when trying to learn something because you just went through it. You can speak to a beginner from a beginner’s perspective and that is invaluable and so appreciated. It also helps you retain the information better when you have to communicate it and break it down into digestible pieces for others. 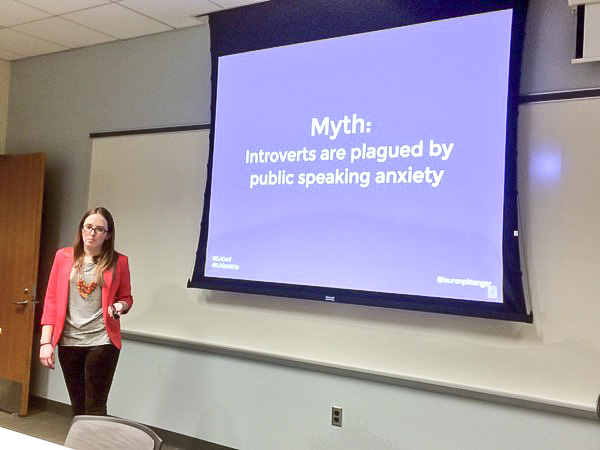 In addition to this, more and more events are claiming to want more women to speak, but so few are asking themselves why women are not seeking out these opportunities to begin with. Our idea was that if women feel like part of a supportive, safe, and inclusive community then there will organically be more women seeking out these types of events; there’s empowerment through being part of a network.

It’s an attempt to go beyond “let’s try to get more women here” and get to the heart of the issue. So much of my confidence comes from being part of a network of women through Girl Develop It. We wanted to create this same type of empowering network for women in the speaking, writing, and teaching spaces of tech.

As Katy said in her opening remarks for the conference, “It’s not just about finding your voice, but helping the woman next to you find hers”.

While we learned a lot from things we got wrong while planning this event we also got a lot right. I feel what we did wrong warrants an entirely separate post, so I wanted to quickly touch on a few things that we have gotten the most positive feedback on and things I personally found to be A+.

I can’t stress this enough. Being able to reach out to someone who has experience planning events at this scale is crucial. I found this in Jeff Triplett, the Conference Chair for Djangocon.

Jeff and I know each other from when I worked at Lincoln Loop and while I have yet to actually meet him in person he has been so supportive and just an all around neat person to know. Djangocon, and the Django community in general, does so many things exemplarily. Being able to reference them for grant application language, for example, proved so handy. They put a lot of thought into all these details and it shows.

One of the greatest resources you can have in life, imho, is someone who is willing to share their failures and lessons learned with you candidly.

We kicked this all off with a series of lightning talks on the Friday before the main event and this ended up being one of my favorite parts. These talks didn’t have to be tech related, and could be about anything the individual was comfortable speaking about.

We had a few scheduled speakers for this and then opened up the floor to whomever wished to speak for up to five minutes about something. 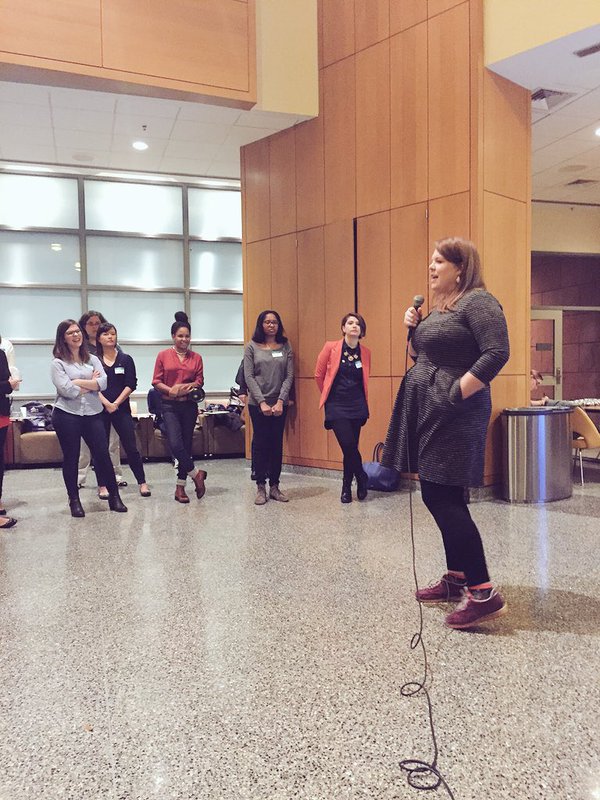 This event, by far, was critical in setting the tone for the entire conference. While we knew there would be nowhere near 100% attendance for this, we forged ahead because it was important to eliminate that awkward conference feel that comes with being immersed into a large group of mostly unfamiliar faces.

If you want people to feel comfortable and be able to share openly, getting them together in a casual environment before the main event is a must.

Genuine Above All Else

This is difficult for me to put into words.

The best part of this event was how real it felt. Speakers and attendees allowed themselves to be vulnerable and share personal stories. I have never experienced anything like this at a tech event before. Without this raw honesty the conference would have not been a success, in my opinion, given our mission and goals.

I wish I knew exactly what to point to and say “this is how we achieved this overall tone”, but I think it’s just a combination of everything: our pre and post networking event, lining up the right speakers that wanted to talk about the right things, having a clear mission, standing behind our established principles even when it meant turning down sponsors. 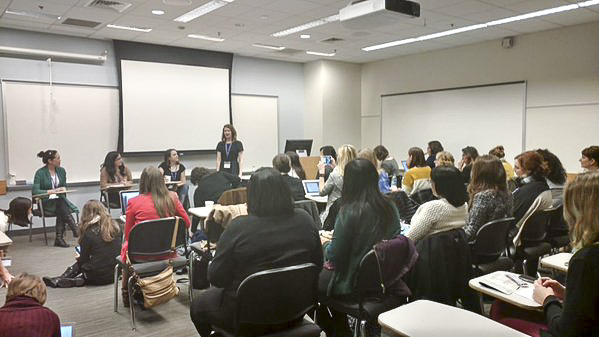 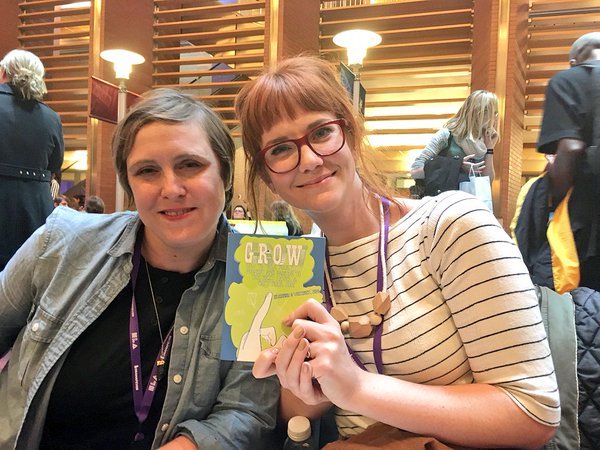 Don’t Tell People What To Be About

As mentioned, this event was women only. What does that mean exactly though? Well, we officially define it is as anyone identifying as a woman in a way that is significant to them.

It can be very alienating and offensive to people to tell them what they are about.

We spent a lot of time on the name as well. It was important for us not to focus on words like “female”, “feminine”, “lady”, “girl”, as these too can all be exclusionary.

Ideally we would of been able to offer on-site childcare, but our budget simply did not allow for this. Instead, we asked all attendees at registration if they would benefit from childcare and if so we provided a childcare stipend to help cover this expense; you should never let childcare get in the way of someone attending your event.

I’ve had people ask how we had people “prove” their childcare expense and the answer is that we didn’t ask this of them. We just trusted people and I wouldn’t have it any other way going forward.

We created something that lives beyond these two days. We regularly have women reaching out on on Twitter and letting us know how this event impacted them. There are women that have been empowered to change jobs, to ask for a raise, to apply to speak, to start their passion project they have been putting off. There’s been solid friendships and connections created here that will outlive this event and it’s so profound. 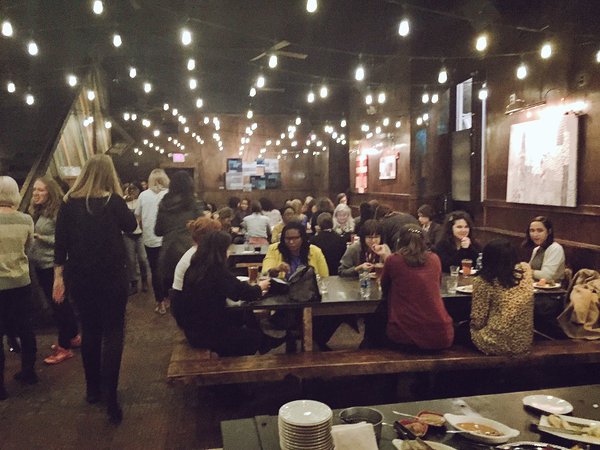 Our Slack channel remains active. There are women sharing job postings they are connected with, asking for advice on projects, sharing call for proposals they come across. It’s magnificent.

We could not have done this without our sponsors; especially NowSecure, Digitas Health, and MapBox.

Because of these top contributions we were able to provide a free ticket to everyone that applied for either a financial or diversity grant and offer childcare stipends to everyone that requested one. 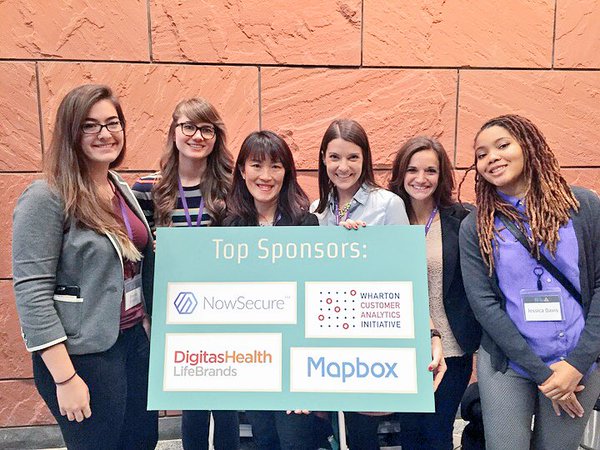 We are so very grateful for their support.

On a more personal level, this was an enormous undertaking. There were so many ups and downs and so many times where I wanted to quit. I gave up countless nights and weekends to pull this off. It was literally exhausting to my very core and I immediately experienced one of the most extreme sensations of burnout so far in my career right after the event.

I realize this is ironic, since one of our main talks addressed self-care and avoiding burnout, but it happened and I am still recovering.

This is one of those instances where you truly need the support and understanding of everyone in your life to make it work: family, friends, colleagues. Many of these relationships suffered a bit while I was simply too busy planning to put much time or effort into them. Not all of these relationships survived, but the ones that matter the most are stronger as a result.

There’s a lot of behind the scenes work that takes place that is just … brutal and ugly. I have so much newfound appreciation for people that plan these types of events regularly. If you are someone that passionately believes in the “fair” distribution of work you are going to have a very bad time planning a conference; it’s never fair.

So, Was It A Mistake?

Do I regret doing this? No, not at all. This is a topic I am endlessly passionate about and there is a true need for it. The positive responses and praise for the event has been overwhelming and truly moving. So, would I ever do it again? Yes, but with some very really changes.

This has been the single greatest learning experience of my career and there is a lot of value in that, PLUS, I met all my favorite humans on the planet from planning this event.

It’s a true network of women supporting and encouraging each other.

A lot of women, both that attended the event and were unable to, have already been asking about what 2016 holds for ELA …

I’ll let you know after I hibernate for at least another two weeks.